Okay, let's face it... Halloween may not be to our liking this year. Yes, we are wearing masks, and some of us have been overdoing a bit on the candy, but that isn't really the point, right?  I did, however, get a cackle over this: 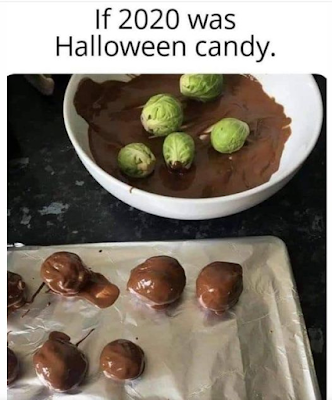 And speaking of vegetables, I helped with a pumpkin sale again this year. What is it about pumpkins? They always make me smile. Every one has a personality and a bright outfit. This one, for instance, seems to be blushing. 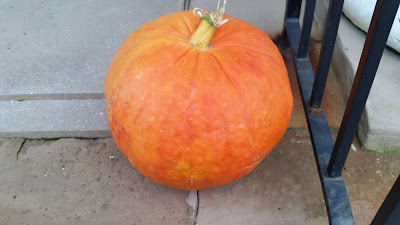 And this one is SO TALL! 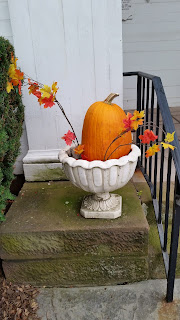 What a swirl of delight! 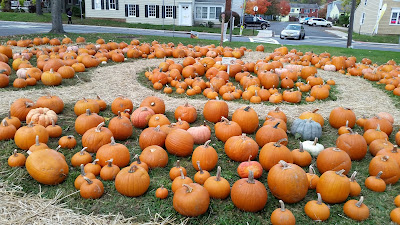 I learned this year that the gray-green ones are HEAVY! 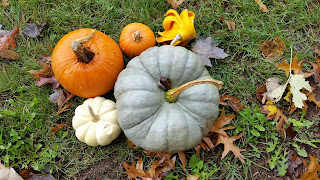 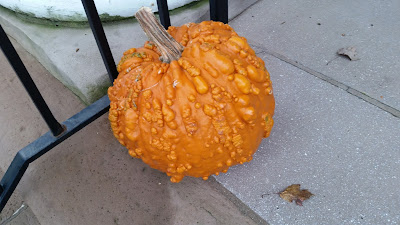 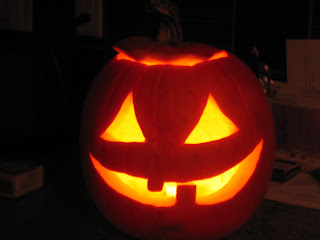 Autumn Haikus and an Anniversary...

Had a lovely drive along the Black River last week, enjoying the glories of autumn. Colors are just peaking here, but the beauty of the river and the beginning of color filled my happy basket. 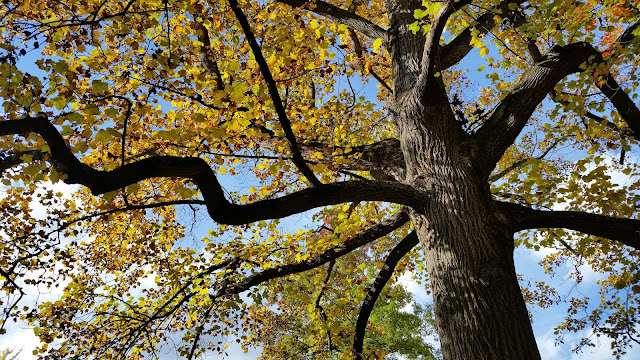 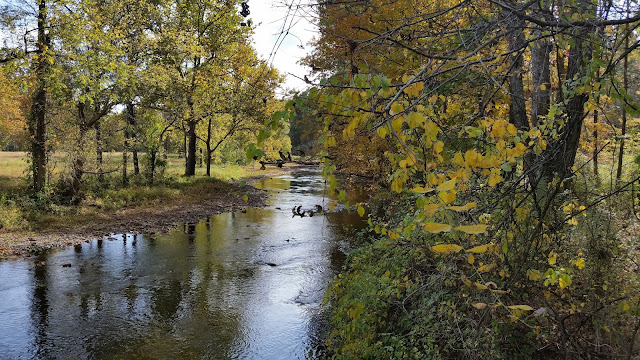 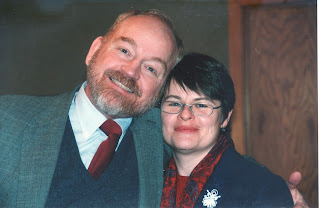 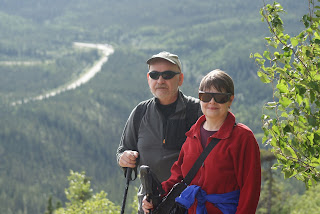 Don't miss my recent post about my Grandpa Otto's Restaurant,

you can find it here.

It's Poetry Friday again. I can hardly believe it... can barely keep up!

Thanks to Jama for hosting today. Join the gang for an autumn poem

Long before "husker du?" referred to a rock band, it was a phrase used by many Scandinavians.  "Husker du?" asks... do you remember?  Although I remember my grandparents and the town of Spring Grove, I don't personally remember the restaurant. It closed before my time. Still, it has been a rich topic of conversation with family members as I've asked... husker du?  Here are some of our stories.

Otto's business evolved over its 40-year lifetime. Below is a photo showing Otto Evenson's Cafe in the early 1900s. 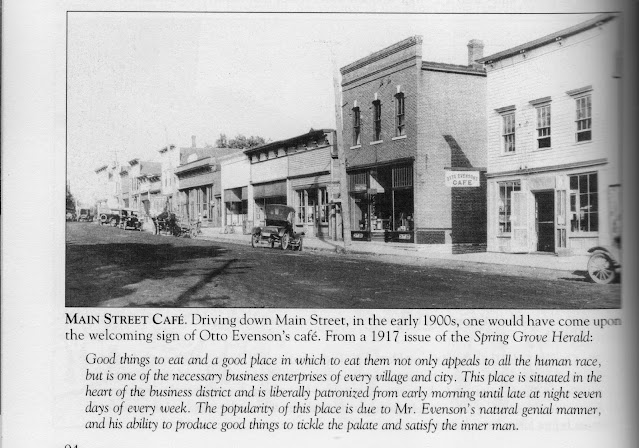 By the time my dad was four or five years old, serving as the batboy for the the Spring Grove Baseball team as seen in this photo circa 1908, you can see at least one team member and possibly several are sponsored by Otto Evenson's Restaurant. No longer a cafe, it was now a restaurant. When I imagine sewing all those letters on a shirt, I have to laugh. By current standards we might name the restaurant Otto's, or Otto's and Etta's... and the name would be embroidered or printed on by machine. Not so easy in 1908.

Anyway, that's my dad, Emil Evenson, in front of my Grandpa Otto. Otto loved sports, but especially baseball. He often listened to games on the radio and attended local games whenever he could. Fact: The first World Series was played in 1903. Baseball was big... 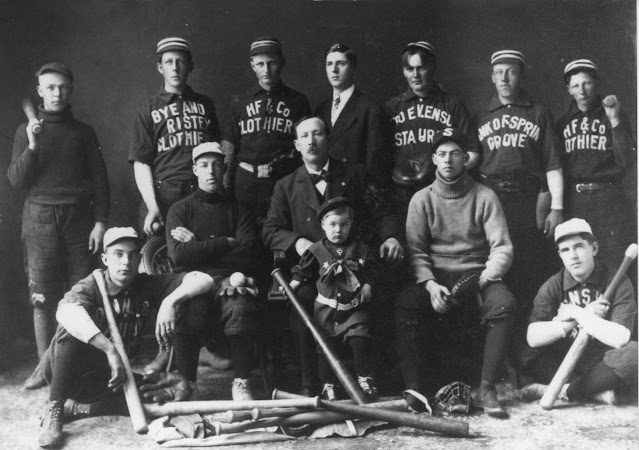 Spring Grove was never big, but in the early 1900's it had something of a heyday. It had a baseball team, an opera house and it also hosted Chautauqua assemblies. I was pleased to learn that Spring Grove also had it's own cartoonist, Peter J. Rosendahl, who included Otto in some of his cartoons. This one shows a Totning festival... folks from the Toten area of Norway celebrating their heritage. Otto was a Totning, and you can see him in the middle right of the cartoon, standing next to barrels labelled Flatbrød and Sur Melk.  Flatbrød is a traditional Norwegian unleavened bread that has a long history, a staple food for shepherds, peasants and Vikings. The original ingredients were barley flour, salt and water, although over time every family made their own variations on this theme. It is served with just about anything, often fish and potatoes topped with sour cream. Otto may have sold it as a light meal, or as a sweet treat with berries and sour cream or "sur melk." From what I can gather, Norwegians love milk, cream, cheese, and butter... and more is better.

Speaking of dairy products, Grandpa always served ice cream at his soda fountain and with his desserts. The grandkids loved it! Talking about ice cream brought up a story about Grandpa Otto and an ice cream salesman. In the early '40s when money was tight, the Dolly Madison ice cream supplier came to the restaurant and took pains to show Grandpa how to save money by serving a scoop of ice cream that looked full and round, but was actually hollow. Grandpa watched, becoming more and more irate as the salesman proceeded. Otto Evenson's Restaurant was known to serve a good honest meal. How dare someone suggest he cheat his customers out of a full scoop of ice cream? He couldn't stand for such a thing! Otto took the salesman by the neck... and I remember that Grandpa had big strong hands... and ushered him out of his restaurant.  No trickery! Otto would serve a full scoop! 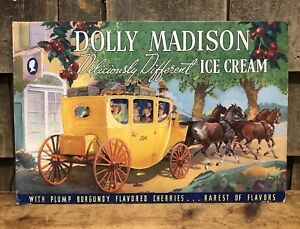 Located at Front and Main streets in downtown La Crosse, the Dolly Madison Dairy began in 1919 as the Tri-State Ice Cream Corp., a company formed from two earlier companies.

In 1939, the company’s name became Dolly Madison, in honor of President James Madison’s wife, Dolley, who was the first person to serve ice cream in the White House. In the 1970s the company became part of Marigold Foods and later was absorbed by Kemp's.

That's my post for today. If you missed the first post about Otto's Restaurant, you can find it here.  I'll share more about Otto and the restaurant in the future. Don't miss it, I've saved some of the funniest stories just for you.

Posted by Karen Eastlund at 10:58 AM No comments:

By October I lose my zeal for gardening, although I'm finally quite happy with my zinnias (some creature ate the tender tips off them just after transplanting, so it took most of the summer to get any blooms) and just behind them this year are some gangly spider flowers. They had been volunteering in front of my house and I decided to move them. I rather like the two together. 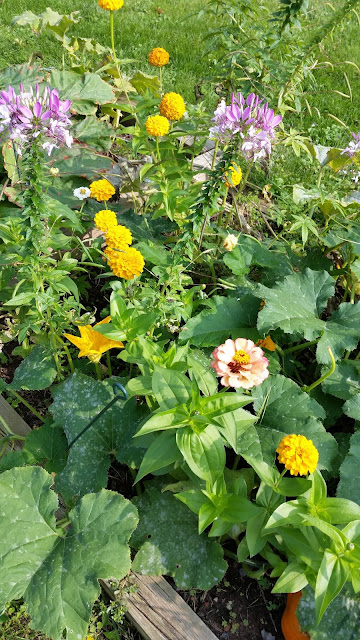 See the little orange pumpkin, peeking in the corner?  I had plans for it as well as another which was still green, but one night I had a visitor. A deer! I don't usually get them, but I've seen them just west of me. Honestly, I'm just as happy without them. But, one found me and ate the little green pumpkin, half of the leaves on my geranium, and some of my day lily leaves. Left calling cards all across my lawn as well. No manners at all. Later, something came along and finished off this little orange pumpkin too, so... no luck with pumpkins this year. It was a volunteer, too... I moved it to the garden.

So this week I paid little attention to my garden until I wanted some parsley. (Cue the melodramatic music... dun dun DUHhh.)  This is what I found...  if you look carefully you can count seven!

I knew I had to write something.... 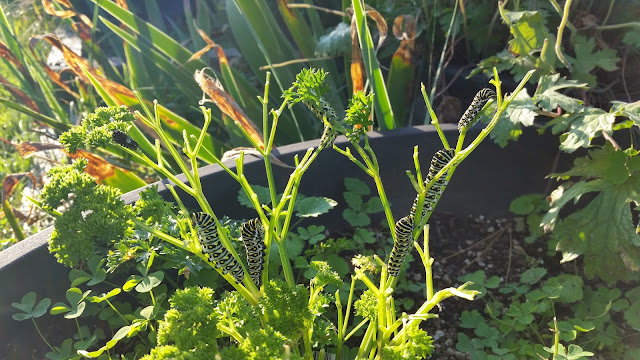 Party in the Parsley Pot

I hadn't planned to throw a party

But my guests were all dressed up

Wee little spats on their feet

And when I tried to say hello

Orange feathers rose from their heads

There's a party in the parsley pot

Have a good week and remember... it's Poetry Friday. Bridget is hosting today at Wee Words for Wee Ones.  Find more poetry fun there.

I got a new car, and actually I love it, but one issue prompted this poem: 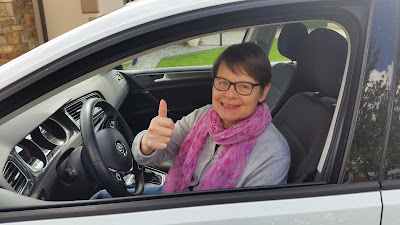 Me in new car!
A Full Six-Year Warranty
My auto blew a gasket
Which began my current tale
Repair was much too costly to endure
So for forty-days and matching nights
I searched and surfed and mused
A used car would suffice, I felt secure
At last I cast my lot and got
A wagon of my liking
Style, pep and cost all fit me well
But driving home at highway speed
A rhythmic moaning hounded me
And where it came from, I just couldn't tell
So I returned to Service
Inquired about the moan
"It's tire noise, no worries!" he said to me
"In time it may get better...
Tires are fine... See ya later..."
I love my car... but can't help moaning about the six-year warranty.
© Karen Eastlund

It's Poetry Friday... join the crowd at Tabatha's to learn about a new novel in verse called Beauty Mark, all about Marilyn Monroe. Did you know she owned over 400 books!

The world around us goes it's way ...blithely...confidently...blooming in season and then letting go, each in turn...rising and falling... with little regard for us. Summer turns to fall, and fall to winter, in spite of our messes, our dishonesties, our foul ups, our inequities. That is something to ponder. Sometimes I need to look outside of the human sphere for wisdom or hope. Consider the lilies of the field... or the stars above... 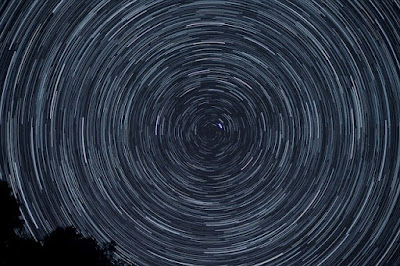 Image by Pexels of Pixabay

A verse from Job caught my imagination this week:  The morning stars sang together, and all the sons of God shouted for joy.  Job 38:7

Recently I saw a Great Performances PBS show, one in a series called "Now Hear This" with Scott Yoo. In his discussion of Schubert, he mentioned the ephemeral quality of music, how invisible threads of harmony ... or sometimes dissonance...come together to create something of great beauty. But those same threads seem to wander off, or maybe dance off, into the universe once the piece is over. There's something so beautiful and ephemeral and mysterious about that idea, and for me it connects with the idea of the stars singing. Think of the universe in concert: twirling, revolving, dancing, humming, singing... sometimes even twanging away. Day in and day out, the stars sing and twirl without one worry about us. The glory and the majesty of it is overwhelming. I want to be part of that choir!

The best and perhaps only way I can expand on this idea is to share a favorite piece of music. I hope you will enjoy it, and perhaps even shout for joy!

October is my favorite month of the year; the cool air, the beauty of the leaves, several personal celebrations. It is also a time of grief for me. It was in October that I lost a child to bacterial meningitis, many years ago. In one way or another, we all carry grief with us, especially this year... and so I hope that in sharing and honoring our memories we might all know we are not alone, that our separateness will dissolve as quoted below, and that we might grow in understanding and empathy. If you wish, feel free to share the names of your loved ones in the comments below. God bless you all. 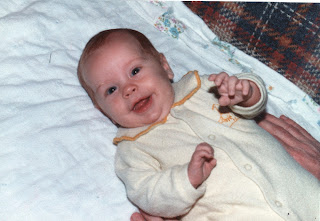 These musing are in response to this quote from Enneathought which arrived via Margaret Simon:"Consider the Holy Ideas today: No matter what type you are, in Holy Love, our sense of separateness dissolves, and we know ourselves as arising from the brilliant light of Divine Love that creates and sustains the universe." 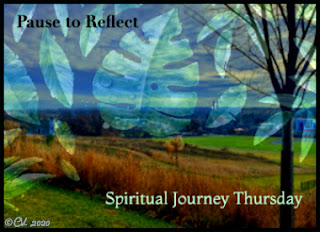 Margaret hosts our Spiritual Journey group today at Reflections on the Teche. Thanks, Margaret!