Spring is turning to summer and my garden is in full bloom. I am so pleased with it this year. Some years the weather is volatile and the blooms are ruined, or it doesn't rain at all and things don't bloom. This year, in spite of the pandemic problems, my garden has produced one beauty after another. 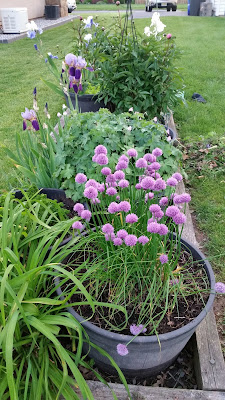 Even the chives are beautiful now. We love them in scrambled eggs, or cottage cheese. 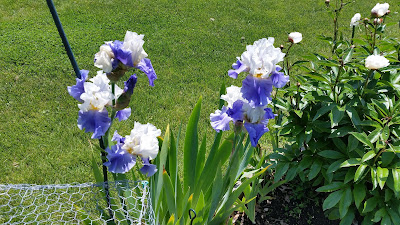 The colors of these irises really pop in the sunlight. The blue and white reminds me of Memorial Day, which I observed by watching some readings and prayers online, then we took this photo for a friend. 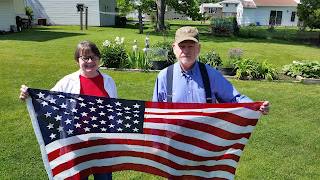 We joined in a Spread the Flag campaign hosted by a young woman friend who is hosting a drive to get photos of people and flags from every state. You can read more here. Please feel free to join in with your photo. 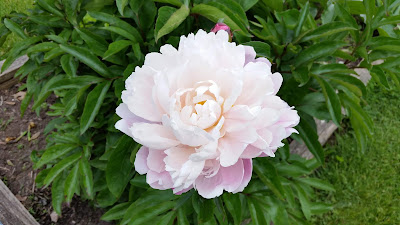 My peonies did not disappoint. I am amazed at their beauty as I ponder their ephemeral nature. 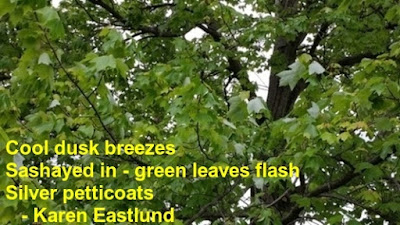 Thanks for visiting today. It's Friday, and every Friday a bunch of us get together to share poems. Join us! This Poetry Friday is hosted by Mary Lee Hahn at A Year of Reading. You'll find links in the comment section.
Posted by Karen Eastlund at 12:17 AM 13 comments:

The Generosity of a Poet

Back in November, when life seemed normal, an unusual and wonderful thing happened.  As I was thinking about a blog post before Thanksgiving, I thought of a favorite poem titled "Applesauce" by Ted Kooser.  It gives me a warm feeling of family and kitchen, and I thought it would be perfect for the post I wanted to write.

Kooser's poetry is honest and down-to-earth, insightful and surprising. In short, it is some of my favorite. So, with that in mind, I decided to get in touch with him and see if he would give me permission to use his poem on my blog. I figured I had little to lose.

Thinking back on it, I should have known better. Publishing is a business and needs to be respected as such, poets certainly need an income, and it was cheeky of me to ask a favor of someone I've never even met. I suppose I let my optimism overtake all that. Instead, I played my only cards.  Kooser is a life-long Nebraskan and I grew up in Omaha so we share midwestern background, we both are interested in poetry, and I appreciate his work. I e-mailed my request.

Here's the interesting part. Very shortly I received a reply email from Mr. Kooser himself, saying that NO, I could not use the poem in question.... BUT... he offered me a poem of his that had not been published. Can you believe it??? Because I can't. That was in November, and I still can't believe it. Nonetheless it is true, and today I offer you, for its debut in the blogosphere and in the world... a new poem by Ted Kooser!

This leather bag of dimes goes hop by hop
over the highway, a motion like that of
a token in a board game, the little purse
moved forward a square at a time as if
making a bid, one toad on offer in exchange
for something of value hidden in weeds
in the opposite ditch. Could be a puddle
of silver, or another few days in this world. A leather bag of dimes...What an unforgettable image! Hop by hop it goes, putting it all on the line. And who knows what the future holds? The toad is fully in the game, we know that much.

In case Ted Kooser is new to you, you should know that he was named the US Poet Laureate Consultant in Poetry in 2004. Many of his poems feature midwestern themes or scenes that leave me nodding my head and smiling. They ring so true. Read more about Ted here. You can read his Applesauce poem here.

I am most thankful to Mr. Kooser for sharing his poem with me, and I take it as a gesture of midwestern generosity that he did so. Generosity is one reason why I love the midwest, and why you will find me mentioning it again and again.

Head on over to Carol Varsalona's Beyond Literacy Link for the Poetry Friday gathering. She's sharing some of her beautiful collection of Nature Nurtures 2020... words to help us all through this unwieldy time.  Thanks so much for hosting, Carol! 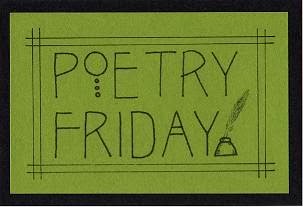 My best to you all for a good Memorial Day Weekend.

Many thanks to Jone MacCulloch for sending me one of her student's poetry notecards.  What a lovely surprise in my mailbox!  Here it is: 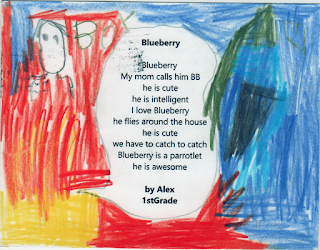 This card really touches my heart as I have a special love for those early grades and their eager students, plus... my mother had a blue parakeet pet. "He flies around the house... he is cute"  Yes, I've been there as a young child also. Thank you, Alex. I can see that you love your Blueberry, and I love your poem notecard. Thank you, Jone, for this lovely project.

Just a little story about our parakeet, whose name was Chipper. He would hop about on the rim of the playpen (yes, we had playpens back then) to entertain my little brother. And... my favorite... when we played cards at the table, he would perch on my dad's mostly bald head and slowly draw the long comb-over hairs through his beak. And once, when he hopped to the table, we put a tissue over him and he hopped around like a little ghost. Hahaha... I laugh just remembering it.

Sharing little stories makes my day. I hope it made yours also.

Hop on over for a visit with Michelle Barnes at Today's Little Ditty for an interview with Nikki Grimes and preview of her beautiful book, Southwest Sunrise.  Just another wonderful Poetry Friday offering.

Have a good week, and stay safe and well.

Though we are cautioned to keep our distance, New Jersey parks have reopened as of May 2, and  on May 3 we went for a walk. What a glorious spring day... 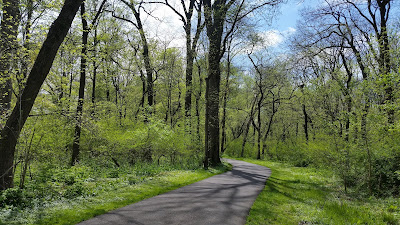 I am thankful that God is in charge of spring. The sky, the leafing branches, the fresh air, the blossoms. Spring has been a constant comfort, always uplifting and invigorating.You don't see people in this picture, but in fact I had never seen so many people in the park. We felt connected with nature and smiled and nodded to each other. It was a community of sorts.

A Time for Everything: Ecclesiastes 3:1-8 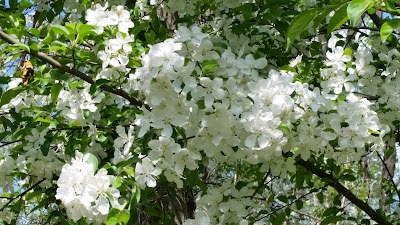 I came across this commentary in the Celtic Daily Prayer:

I have observed through the years that most Christians have little understanding of the word "season." Our Lord is a seasonal God; He comes, He departs. His faithfulness never changes, but His seasons do! There are seasons when the tree is green, there are seasons when it is dry, and seasons when, for the life of us, the thing looks dead. Now, does this mean you are serving some capricious God who comes and goes by whim? Or, could it be, that it is only through seasons that true growth may come?

Perhaps this season of Covid offers us time to reconsider, to wrestle with God, to redirect our energies, to reshape our thoughts. The season of Covid surely will be remembered as a time for letting go, for grieving and lamentation. Even in the midst of suffering and grief, I believe that God hears us and is near. And as the season continues, I begin to wonder...perhaps it will also lead to new growth. Perhaps a profusion of new connections will blossom from this time. When I commune with the world outside, I can only be hopeful.

Thanks to Ramona for hosting our Spiritual Journey Thursday group. Find her and the rest of the group at Pleasure from the Page 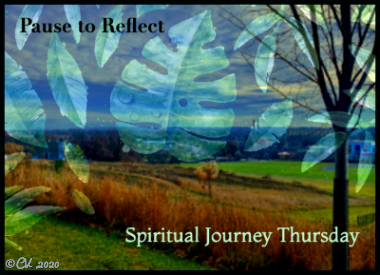 I've had sad news this week. My sister-in-law has died. Hers was not a Covid related death, but because of Covid her family could not visit her while in hospital. Lois had emergency surgery and had been moved from ICU when something agitated her and she died. She was 88.

Our grief is for a woman of great heart and talent. Along with her other chores, Lois made many many quilts, stitching the layers together by hand, giving them to family, church and beyond. We will miss her greatly. Lois was a lovely, lovely lady.

“The bustle in a house
The morning after death
Is solemnest of industries
Enacted upon earth,--
The sweeping up the heart,
And putting love away
We shall not want to use again
Until eternity” 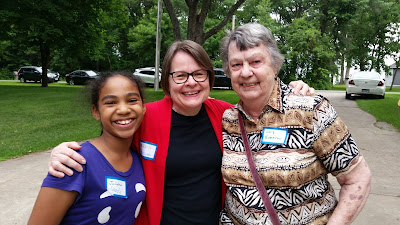 Big families are not in vogue these days, so you may be surprised to know that Lois, Juliana and I share the honor of being the 9th child in our respective families. In my case, I grew up with six brothers and three sisters. Out of a sense of amusement, I've started taking a photo with those I meet who are also 9th children. Hence the one above.

Me and my siblings...

Being the 9th out of 10, it is my part to survive the passing of siblings. That's the sad part...the hard part. But there have been many blessings to offset that sadness. I've enjoyed a wealth of family celebrations, photos, hugs, stories and more. How I have loved my family! Especially the stories... I'll be sharing more of them as time passes.

Thanks to all who stopped by this week to read the story about my dad being a hero during the 1918 influenza outbreak.  In case you missed it, click here.

Thanks to Elizabeth Steinglass for hosting Poetry Friday today. You won't want to miss
her video.
Find her here.