Family stories surface in these quieter times, and I have recently learned one I would like to share.  So, allow me to introduce my father, Emil Evenson, who was a first responder hero during the Spanish Flu outbreak of 1918.

Wait... I hear you... you're asking the same thing I asked.  How old could he have been?  How could he have helped? (At the same time, you probably begin to wonder how old I am? Haha! I shall not tell.)

My dad's dad, Otto Evenson, owned and ran a restaurant in Spring Grove, MN. Grandpa Otto also owned one of the few automobiles in town, but he had not learned to drive. (In fact, he never learned to drive.) When the influenza struck, the local doctor was no doubt inundated with patients, both in town and in the outlying farms, so apparently Grandpa Otto offered his car. (This is where the story gets hazy.) For reasons unknown, 14-yr-old Emil was called upon to drive the local doctor on his rounds. 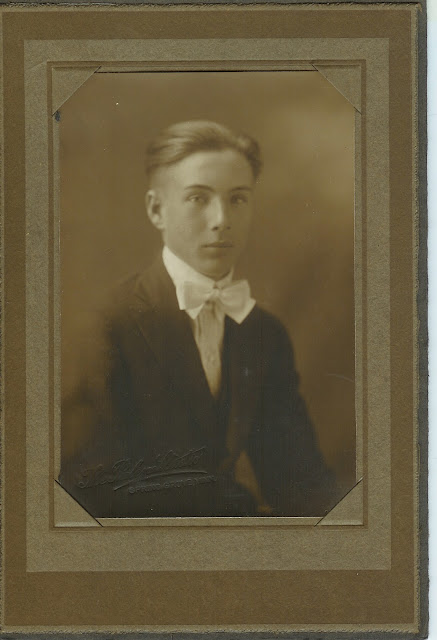 Before you gasp, remember... it was a different time. Children were not afforded the sheltered childhoods we now expect. Historians remind us that children have always "worked." In hunter-gatherer societies, children gathered firewood and picked berries. In farming communities, children were expected to sweep floors, feed animals, gather eggs, etc. Our early mills employed children as young as 7, and it was not until 1938 that the U.S. passed child labor laws. Most parents simply could not afford to raise children without some compensating labor. So in 1918, a boy of 14 driving a car was not unusual. Few cars were on the road. Mud, ice and snow, and horse-drawn vehicles were greater dangers. 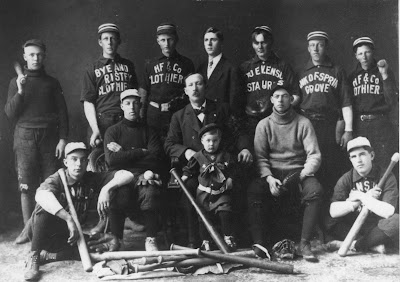 Spring Grove baseball team, circa 1907
My grandpa Otto backed some of the team,
that's Otto in the middle with the bow tie.
My dad was the bat boy.


Even more dangerous was the proximity of the influenza. We don't know if Daddy went into the homes with the doctor, but he may have. Daddy told my brother about one farm where everyone had become so ill that several members had died but no one in the family had the strength to bury them. What a somber impact on a young man. For protection the doctor carried a bottle of ethanol and he and my dad swabbed their faces and hands after each visit. That was forward thinking at the time.

Check out this article to learn more about the 1918 influenza pandemic: https://www.history.com/topics/world-war-i/1918-flu-pandemic


Our world today would look like science fiction to my dad and my grandpa. And yet, we share the experience of pandemic. 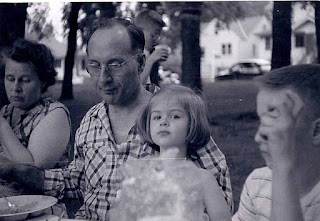 Mama, Daddy, me and brother Bobby at a picnic

I salute those on the front lines today, and I am proud to know that my dad was one of the heroes on the front lines during the 1918 influenza, a time of scant medical resources. I'm thankful that Daddy did not become ill, nor did anyone in his family, but what a scary and sobering experience it must have been. Until recently, I had not heard this story of courage and selflessness. Now, I sit up a little straighter each time I consider it.

Posted by Karen Eastlund at 2:56 PM

Email ThisBlogThis!Share to TwitterShare to FacebookShare to Pinterest
Labels: Family